Can A Nurse Use Delta 8? 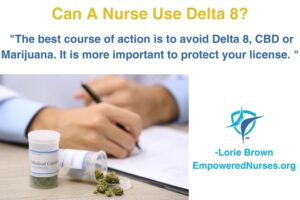 You are probably wondering what is Delta 8?  Delta 8 is known as delta-8 THC tetrahydrocannabinol (THC), is a psychoactive substance found in the Cannabis sativa plant, of which marijuana and hemp are two varieties. It is legal under federal law because it is derived from the hemp plant which does not contain THC (but usually contains 3% or less).  The thinking from the federal government is that there is not enough THC to make you feel “high.”  It is also my understanding that even though it is legal under federal law, certain states consider it illegal. It is also my understanding that there are reported adverse events for Delta 8 and people do experience effects similar to marijuana.

However, the problem for nurses is that there is no way to know if there are trace elements of THC in Delta 8 which would show up on a urine drug test. The Boards of nursing still frown on the use of marijuana even with a medical card.  Because there is no good testing of THC to see when it was consumed or if the psychoactive components are still active, the Board does not know whether this was consumed over a long weekend or during a stressful shift. Since there is no good testing, the Board does not know if it was Delta 8, CBD or Marijuana consumed.

The best course of action is to avoid Delta 8, CBD or Marijuana.  It is more important to protect your license.  The Boards have expressed concerns that nurses must know what goes into their bodies.  You are responsible. Saying you took Delta 8 or CBD which is legal, is not a defense.  Just like saying “I just had a glass of wine” which is legal and having a high blood alcohol level.