It’s About The Patients 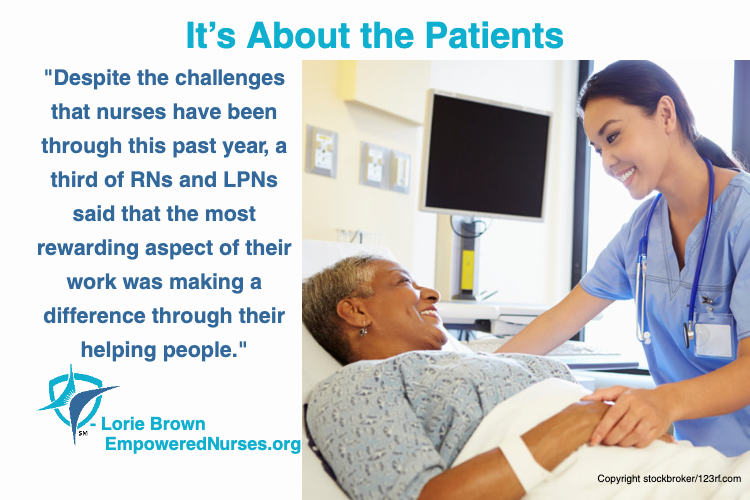 Despite the challenges that nurses have been through this past year, a third of RNs and LPNs said that the most rewarding aspect of their work was making a difference through their helping people.

This surveys’ results are different from other similarly targeting surveys regarding nursing satisfaction.  Other surveys found nurses were more dissatisfied.

It was also surprising in the percentage of nurses up to 25% who reported that they had known a fellow health care provider who had died of COVID.

It is sad that nurses need to endure this violence while simply doing their job.

While ailing patients can be expected at times to exhibit less than congenial behavior, their illness is no excuse for violent interactions as NO NURSE should be subjected to any type of abuse.

The most concerning statistic revealed was that a number of nurses 9-16% had experienced sexual abuse but did not report it.  What happened to the “Me Too” movement? Those who do report sexual abuse said that the issue had not been resolved to their satisfaction.  It is concerning that if a nurse does the right thing and reports something, that they are not satisfied with the result.

In a recent international study, it was noted that 43.15-83.5% of female nurses were sexually harassed.  This is unacceptable.  The nurses felt shame, embarrassment, humiliation and belittlement.  The psychological consequences are devastating.  Systems need to be put in place to protect these nurses, listen to them, believe them and support them.   Nursing education needs to prepare nurses what to do if they find themselves in this type of situation.

As I have often noted, nurses are the hardest working professionals on the planet, and it is unfortunate that they have been subjected to these abuses.

Things will not change until the nursing profession speaks up.  Nurses should not be expected to endure abuse.  The only way to stop it is for nurses to speak up.

Speaking up for yourself and reporting these abuses at least will make you shed light on the problem and make it known.  You are not alone.