Should I Stay? Should I Go? 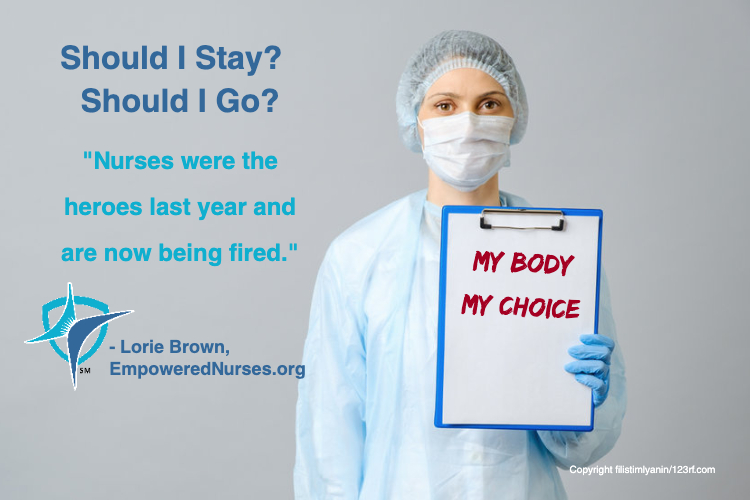 I really don’t like writing politically charged newsletters however many nurses have reached out to me about this topic, and I am all about serving you, the readers, that I felt that it is important.

But first, as a brief report, a single hospital in Lowville, New York, the Lewis County Health System, has closed its maternity unit because several nurses have refused to get “the injection!”  They will no longer deliver babies there until they find nurses, who have received, “the injection,” to replace their departed staff.

From here, allow me to emphasize that I believe you have the right to accept or refuse what goes into your body.  No matter what your choice may be, I respect it.

However, if you face having to choose to get the injection or be terminated, for educational purposes only, termination may be the better choice.

Being terminated, you can be eligible for unemployment benefits.  In addition, if the mandates are at some point found to be in illegal, you can file suit.

It is my understanding that the U.S. Food and Drug Administration has approved Comirnaty which is reportedly the brand name for what was previously known as Pfizer-BioNTech.  However, no Comirnaty is available and BionNTech is still being administered.

Interestingly, other places say it is appropriate.

In addition, the U.S. Code does not state whether this applies to private or state employers.

While the law is being parsed out, we’ll just have to wait to see what becomes of this.  I do not work in this area but would suggest that you contact an employment law attorney to determine your legal rights.

Something else you might choose to do is to see if your state allows you to provide a religious exemption for the injection.  The threshold for a religious exemption is a strongly held personal belief which does not have to be a religion per se.  Ideally, employers are not to question you about your beliefs, but we know they may still do so.

Under the U.S. Supreme Court decision in Jacobson v. Commonwealth of Massachusetts 197 U.S. 11 (1905), the Court upheld the authority of states to enforce compulsory vaccination laws.

I wish this was not happening, but it is.  Nurses were the heroes last year and are now being fired.

The most important thing now is that you take of yourself and make sure that you have informed consent before deciding whether or not to take the injection!